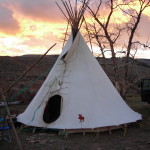 What is it about a tipi that catches our imagination? I’ve always been fascinated with the tipi throughout my life. It wasn’t until I was living in Montana on the Crow Indian Reservation that I had the opportunity to experience a tipi up close and personal. The tipi represented our circle of life and the events within that circle. There are numerous other things associated with the tipi but over the years we’ve kept that feeling of the circle and the family within.

In 1981 I purchased a Sioux 16′ plains tipi made from 16 oz duck canvas in Sheridan, Wyoming from Reliable Tent and Awning. Included in the purchase was a 6′ liner to go around the interior for added comfort. After all these years, it is still in great shape. It’s not used as much as I used to use it in the past but it’s ready to go anytime.

The poles came from the Pryor Mountains where the lodge pole grew as thick as the fur on a bears back. When they grow like that the thicker the better and the straighter they grow. With the right seasoning, those poles are still in use with the only breakage from where the knots broke off when dropped on the ground. Out of the two sets that I got, there are still about 1 ½ sets left. They are so seasoned now, I don’t think you could drive a nail in them.

Peeling the poles was a family affair and done at a gravel pit near Ft Smith, Mt. I had leased the land for my horses at the time and it seemed only right that the poles should be seasoned once they were peeled. This became an event that started a small rumor in the Valley of the Big Horn River and ended with a meeting with the Crow Indian Tribe Buffalo Herder, Leo Plain Feather. Little did I know that from that meeting would start a friendship for years to come. (See Custer’s Last Tipi Stand)

We used the tipi as our main lodge while traveling on vacations and horse races throughout the country. At the time of the endurance racing with the horses, we had an Alaskan camper on the back of a Chevy crew cab before crew cabs were cool. With the tipi poles on top of the truck and camper and the horses in the trailer, we were quite the family unit on our weekend jaunts. The kids loved sleeping out under the stars on the plains and mountains. The camper became the cookhouse when jacked up and life was enjoyable to all. How cool was it to camp on the backside of Mt Rushmore amongst the buffalo at the Hart Ranch Ride!

Later, when we moved to Wyoming, hunting became a large part of life in the fall. There is nothing like setting up a lodge in the mountains with the elk bugling at night and coyotes howling in the distance. And of course an added bonus is the fire pit in the middle of the tipi. This required stoking the fire several times during the night and that’s one reason they made long johns. I often thought of how cold it could get and what the Indians had to endure. I remember one little girl in my daughter’s fifth grade class as she was helping set up the tipi for American History asking if her ancestors had gotten cold as she was Native American and had never saw a tipi. Well, I tried to explain how it must have all been relative to them because no one had ever told them that it was -30 degrees out!

One season we were camped in the Jim Bridger Mountains in Wyoming for elk hunting and my oldest son was on leave for the hunting season from the Navy. He had brought his 10×10 house tent with special wings for sleeping, etc. Well, the snows hit one night and piled about three feet on the level. You can imagine how flat that tent became. Of course the snow just slid down the tipi and made it warmer on the inside.

We had wanted our memorials conducted in the tipi and when my wife passed unexpectedly in ’07, the family gathered for that final tribute and celebration of life. To us, this represented the circle of life. The family and friends gathered and when all was finished a strong wind blew through the camp. The wind had been my wife’s ally since we lived in North Dakota and was a sign of passing to us. It was an amazing day. And when my oldest son was married in Washington, the tipi was there as a symbol of the family and the circle of life. 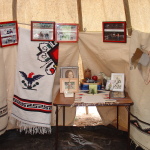